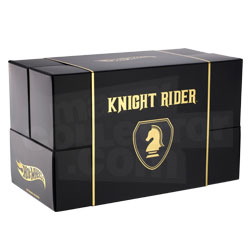 Pre-order runs through June 14th, but supplies are limited so act today before they sell out!

I would love to pre-order one of these but I won't be able to go pick it up in person at SDCC.

Anyone else feel like Brad Pitt at the end of the movie Seven?
The Knight Rider Fan Game Project:
http://www.theknightrider.com
Top

I guess life goes by too quickly, I messed up, man, thought this was pre-order for ordering. Man, what a idiot(Jjokin) I really didn't read the whole thing, my goof, I guess I just fed some people's lunch A? Darnit!!! Oh well, I probably won't hear from them neither.... I have e-mailed them about it , but won't hear anything till Monday probably. Oh well, not the first time I've thrown money away on Knight Rider. Won't be the last either. Need to slow down some.....touring band, family, cars, Geez...... Can't read everything ya know, be careful guys!!!

P.S Laughing and shaking head(idiot!!!!) (to myself)
You all can laugh!!!! HAH!!!
Never underestimate the power of stupid people in large groups
Top

Which scale KITT is this? The box looks very cool

They are only showing a picture of a box. I didn't even know what this was
for. I was waiting to see someone identify it. Looks like a box set of dvd's for all I can tell.

How do they put a scanner and phrases in a matchbox car?
Brian - Knightdriver.com
Top

I dunno i juste tell you what I 've read
Top

Judging from the past SDCC and Hot Wheels exclusives this will just be a retooling of the 2012 1:64 scale KITT. Should have accurate rims and a painted interior. Sounds and scanner are most likely built into the acrylic case.

If you go by what Hot Wheels has done in the past for SDCC Exclusives then this will most definitely be a 1/64 scale model. For those thinking the box is too big, well the DMC Delorean came in a plutonium box that was much bigger then this one "appears" to be (but lets be honest I have no clue how big or small it is, just taking a guess!). Though this looks to be about the same size as the Ghostbusters Ecto 1 SDCC Exclusive. Those arguing "but it has sounds and lights", keep in mind these cars are typically hand painted (hence their exclusiveness) and screwed down in an acrylic display, the cars aren't meant to be removed and played with. The working scanner and sound effects/talking features could very well be built into the acrylic case.

Of course I could be 100% wrong, and they could pull a 1:43 out on us and that would surprise the heck out of me. But no prior photo leaks? No toy collector sites reporting on a 1:43, No information from Hot Wheels on a 1:43 other then its coming, Hot Wheels hasn't been showing it off at Con's like the 1:18 either, but they are just going to give an exclusive version of it away at comic con.... for $40... when the Elite 1:43 Ecto retail was $49.99, and you are telling me with electronics this one is going to be cheaper? Highly unlikely guys, but I'll cross my fingers for you!

Also want to note this car is priced only a few more dollars then the Ecto 1, and the Delorean exclusives. Seems like just enough to cover the extra cost of the electronic components that the other exclusives didn't have. I definitely don't have the first clue when it comes to toys other then to purchase them lol, and I know we have people here with connections to Hot Wheels, so they would definitely be better to answer this then me for sure! Just my two cents.

EDIT, Also wanted to mention that a lot of people (including myself) think a working light could not be fit to a 1/64 scale car, BUT Hot Wheels is releasing an exclusive Hot Wheels 1/64 Back To The Future II car with working lights that you can currently per-order @ http://www.hotwheelsshop.com/store/hwpr ... oup_id=494
The Knight Rider Fan Game Project:
http://www.theknightrider.com
Top

Hope you are right, but again at the cost level I think it's unrealistic to be anything but a 1:64. The DVD box set had a working scanner, who is to say the scanner is not a part of the acrylic case in the same fashion? Not trying to be the downer here, I really hope it is a 1:43, that would make my day for sure. Guess we will find out soon!
The Knight Rider Fan Game Project:
http://www.theknightrider.com
Top

For the price I guess it indeed is 1/64 as I know very well the usual price range in 1/43 models, which has raised noticeably recently, for example new Minichamps models used to cost around 30 Euros, now they are about 40 Euros, etc.
As for the electronics size, took comparison photo of my 1/64 KITT and the circuitry board from one of those cheap Chinese "spy" video sunglasses which can record audio and video & take photos, save them on MicroSD card & transfer files + charge the LiPo battery via USB cable.
This circuitryboard could just fit inside this KITT model but the LiPo battery of course wouldn't but perhaps they might manage to design smaller simple scannerlight & soundclip circuitry board to fit inside this KITT and power it with small battery which are used in wristwatches etc.

Interesting.. It could possibly be similar to what Hot Wheels did last year with their Ecto-1 for SDCC.. Fancy packaging and all. An improved mold over the mainline 1/64 with better paint and details etc.. Except KITT will have a light up scanner and talks. A notch up over the current one in their 1/64 range..
Top

Just received word from Hot Wheels contact...this is INDEED a 1/64th diecast. He didn't mention the scanner or voice chip, but I assume it is probably part of the packaging and not the actual car.

Comic Con has become so hard to get into, now that EVERYTHING is done in advance through their on-line ticket sales system. They notify in advance about the precise minute the tickets go on sale. Then, there's a mad dash that taxes the system to no ends. In basic, all I ever saw was a white screen of ziltch...until well after the rush slowed down to let me know that all tickets were sold out. I've heard many other tellings of this very same fate. Yet, others say it was a well perfected approach with no flaws to speak of.
Top

Wow imagine that! 1/64 with all special features built into the acrylic case. The wheels are yet again pretty disappointing, but overall can't wait to get it!
The Knight Rider Fan Game Project:
http://www.theknightrider.com
Top

Very nice, KITT is positioned like in the trajectory guide display before turboboost

Very nice! Wheels kinda disappointing, reminds me of the wheels on the classic 1/64 Kenner KITT.. Overall, it still looks good... I hope I can get it...!!!
Top

Yup your right, they are just about the same as the Kenner KITT. I'm very excited, can't wait to see it in person!
The Knight Rider Fan Game Project:
http://www.theknightrider.com
Top
Post Reply
22 posts • Page 1 of 1