Does anyone know about the current status with knight rider the fan game ??
On the Quest for filling in the gaps from right after after Scent of Roses 1986- Knight Rider 2008
Top

Think ot might have been abandoned because of a cease and desist order from Universal.
Top

Knight Racer wrote: ↑
Tue Mar 20, 2018 5:32 pm
Think ot might have been abandoned because of a cease and desist order from Universal.

wait universal sent a cease and desist ??????
On the Quest for filling in the gaps from right after after Scent of Roses 1986- Knight Rider 2008
Top

No cease and desist offically. We're just playing this one close to the chest and working on everything in private now instead of being openly public and accidentally inviting a C&D. I've never been good at things like public relations and talking to people and I hate social media and what it's becoming. One day the game will just pop up online with no fanfare or glory with just a mega link and a torrent.
The Knight Rider Fan Game Project:
http://www.theknightrider.com
Top

When that does MSken, I'm going to be playing the hell out of that fangame. Hope it still happens.
Top

I still say the wisest approach to all this is to release a generic driving game. Universal downloads the game, sees nothing at all of their material and thinks nothing more of it. Now the Knight Rider material is a side option patch that isn't directly present upon the main page. Sure. The code may have to take some revisions to permit patches/DLC. But, it reminds me of the way hotels may treat things. Call it a 'room party' and you may get in trouble. Now, a 'gathering' is a whole different thing. It's just a word. But, a change of words is enough.

What I am trying to say is that a 'Knight Rider' game confronts the copyrights. A 'Ruiner 2000' lets GTA have their KR fantasy without the legal tape.

Or, how about an example from That 70s Show? The kids get this idea to sell Ted Nugent shirts at the concert. Only, a typo winds up creating a bunch of Tad Nugent shirts. 'Ted' would have incurred multiple legal issues. 'Tad'...gets the police to laugh at the kids.

Your excellent game can work just fine. Just learn the lessons that AM2R (Another Metroid 2 Remake) has to offer, first.
Top

While I still think the patch/DLC is the safer way to go, I got a better idea for sneaking by the legal catch.

First off, DON'T name the game Knight Rider (anything). Be cleaver about it. KR related. And, to me, going with a suggestive title sounds better. Like call it "The Phoenix.' (Get it? As in 'Knight of the Phoenix.' AND...a popular icon of the Trans Am was that phoenix decal on the hood.) Plus, when the player starts up the game, there is nothing to do with Knight Rider...on the surface. Now, that is very important, here. Most executives whom may even come snooping around the game probably won't play long, anyhow. I'd say the opening of 'The Phoenix' should have you playing as some police officer, or something. Can have this cover character do some light weight missions inside the main 3D worlds. Drive cruisers. Heck. Have a Phoenix decal'ed Trans Am as his personal car. (Pontiac won't care any more, I presume.) However, to unlock the real KR mode, have this cop arrive on that fateful night when Michael Long (might want to leave subtle hints that the department has a Michael Long.) gets shot. (Can be a repeating event at a certain point in time on the game's clock.) Then, figure out a couple other episode related events to also visit. (How about taking up the mysterious case of Long's potential death and that mysterious helicopter that picks him up after the shooting. Only to catch some reason to check out a daily demolition derby with a mysterious black T-Top that conquers the race...scratch-less.) Witnessing these set of events will unlock the real game...and hopefully, take too long for any game disinterested managers to ever find. (Remember that some games in AAA rated retail games still take years to discover.)

Now, I do see it being more poetic to go with Trust Doesn't Rust by having to locate Tony & The Rev to track down their theft of KARR and the string of crimes that are committed, afterwards. But, KotP is a better starting point.

Ultimately, the true goal is to sneak the game by, without making a bold faced statement that causes the trouble you've already mentioned is bound to happen.
Top

Here is a logo idea that I made, it's just an idea don't get mad about it and I made it with ms powerpoint and edited with Microsoft Photos editor and the Pixlr editor in this site http://www.pixlr.com PS. If is this cause any problems I will delete it without problems. 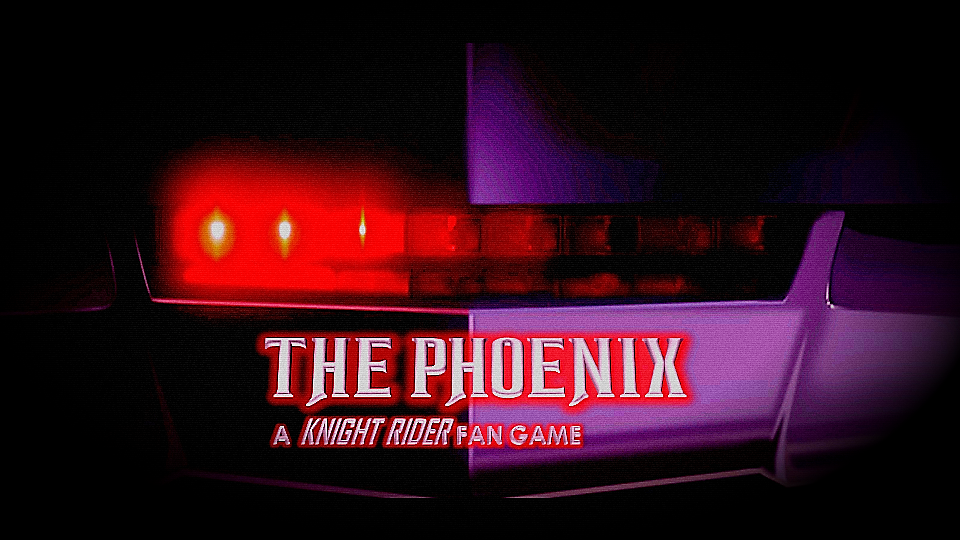 Not sure why MSken would get mad about it considering that's Nick Nugents artwork.

The reason why that can't be used is because it's still universal's IP. Ms men would have to use a different car never used in any of the shows/movies for instance a camaro, get rid of the red scanner in the front entirely, change all names of every character and any similarities to knight rider pike the TV seriesnvioer did when they made a show about a supercar that fought crime. Their series began with a criminal whonwoildnused his car for robberies that had a car accident. His face was altered and memory was whipped clean. Given a new identity and a new microship in his head that would give him the new identity and keep the old one repressed.
Top

This project is in a weird spot. The best scenario of the lot would be if Universal could 'officially' recognize that this was a fan made tribute that was totally made 'not-for-profit' and honor the ideals of Fair Use for non-profit entertainment. Things are rarely that straight forward.

The next best thing is probably beyond impossible, in where there could be enough fan support for this game that a GoFundMe/KickStarter or something could happen that would gather up enough money to outright buy into the rights for the show and characters. I'm guessing the potential figure for this to be in the millions. So, that's not going to be viable. And that is even considering that Universal would be open to renting out their characters to begin with.

Rewriting the whole thing to avoid any copyright references is like ripping the heart and soul out of the whole goal, here. AKA: Knight Rider 2010. And there are whole postings on that subject.

Surprise flash publishing the game and challenging a C&D (like with AM2R) isn't the way to do this. Years of hard work and dedication, shot down by a standard OP reaction. It's just not right.

Which really leaves us the vague area of concealment. I wish that did not have to be the case. But Fair Use tends to reside too often in the shady zone, more often then it should be.
Top

Seriously, i'm saying this in the best way possible but i'm sure all these ideas are old, with all that time working on the game surely much more than that has been thinked of, so just leave it be.

I'm sure the people working on it have their own ideas and pretty much know what to do and how they'll do it.
Top

Not mad at all

and yes I have 100% permission to use Nick's artwork, he is a co-producer after all. Some good ideas here, and we have time to figure out what we want to do that's for sure. My major hang up is simply money. I'm doing everything I can to start my own business that I can handle while being disabled, so not only can I support my family better than social security helps out with, but I can go back to dumping 250-500 bucks a month into development to get help and speed things along. Again I'm not taking any money from anyone no gofund me's or patrons in my name please, I'm just giving a status update.
The Knight Rider Fan Game Project:
http://www.theknightrider.com
Top

That's awesome; I'm glad you keep us updated.
I wouldn't have a problem if you wanted to crowd fund (not sure that many of us would) but it's pretty cool that you're doing it on your own.
Heaven, where all QC only has to be run once.
Top
Post Reply
13 posts • Page 1 of 1