I am, at this moment, at a KR filming location

Somebody can tell me if this house exists that says “House of The Rising Sun” in the episode Knight of Phoenix?

(Am I just tired or do both of these photos have two KITTs?

)
Hello, I am Sue’s Hybrid Automated Droid One-thousand. But you may call me SHADO.
Top

No, the top one has two (one in the back right and the one in front). The bottom one has 3. The one on the left you can see part of the front fender and front tire.

FuzzieDice wrote:No, the top one has two (one in the back right and the one in front). The bottom one has 3. The one on the left you can see part of the front fender and front tire.

No Fuzzie that’s not KITT that one’s KARR 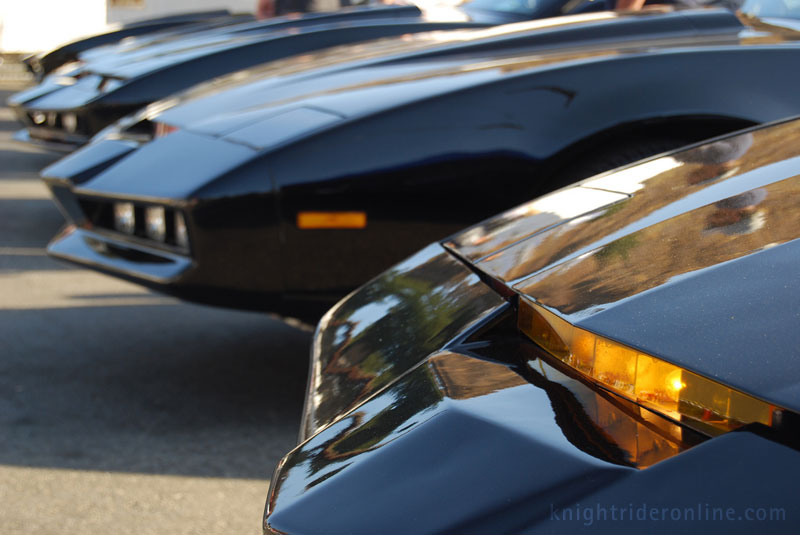 cool I was just gonna say that!

Sue , If im right did the guy in your interview say they could change the voice box/scanner between Kitt & Karr depending on what replica they wanted to represent at the time?
http://www.youtube.com/user/wickedweeezl
Top

Sue , If im right did the guy in your interview say they could change the voice box/scanner between Kitt & Karr depending on what replica they wanted to represent at the time?

Yes that’s correct, nothing fancy; he just pulls out one and pops in the other. He said the car can only go on the street legally with the KARR scanner; the other is too much like a cops. He had changed them out but was still playing the KARR audio and I was thinking he made a mistake, until he reminded me KARR had a red scanner at first. Silly me.
Hello, I am Sue’s Hybrid Automated Droid One-thousand. But you may call me SHADO.
Top

The house Greystone Mansion where a place was filmed in the television series Knight Rider in the episode "Knight of Phoenix" where appears the actor Michael Knight (David Hasselhoff) to arise of stairways and it repairs that are same the stone arches (current) in bass in the picture in the city in Beverly Hills.

My wife and I just returned from a week-long vacation in California. I managed to visit a few "Knight of the Drones" filming locations in San Francisco...there were a lot more I had planned to check out, but unfortunately I didn't have the time. On to the pictures. First, the easy-to-find one: KITT driving over the Golden Gate bridge. In this still, he's driving toward the city, we were driving out of it:

Next is the marina that KITT drives by both at the beginning and the end of the episode. We didn't make it to the marina but were close enough to get this comparison shot: Now, on to the neat locations...Fong's China Trader Restaurant, located at 675 Jackson St in Chinatown. The restaurant is now a DVD/music store...the inside looked NOTHING like Fongs: The next few screencaps are from The Embarcadero located on San Fran's shoreline, right by Fisherman's Wharf (Michael even mentions The Embarcadero near the episode's climax). I wasn't able to capture these pictures from the exact direction that they did in KOTD (due to heavy traffic/people) but you can see it's the same:

This ski mode was on the Embarcadero as well:

Hey, Great stuff Joe as always!, exact locations!. I hope some day meet this places in person but for now I agree to see in photos and compare the locations!, I love this thread!!!!...

Thanks! It's always fun to visit these locations. Let's keep going!

Cool Joe! Things haven’t changed much there have they.
Hello, I am Sue’s Hybrid Automated Droid One-thousand. But you may call me SHADO.
Top

You should have joined us last weekend to do comparisons at Saugus & the Santa Clarita jail etc...
Sorry we missed you, maybe next year either California or the Las Vegas Knight Fest.
Also Ron Martinez wanted to get one of your books,

Time to button up.

Here it goes the video that I found in the site Youtube Knight Rider - Red Bluff:
http://br.youtube.com/watch?v=wHLUwOqgLNk

It's been a while since my last post. After watching the KR2008 premiere,
I kind of miss some of the styles in the original Knight Rider. There were
many rural scenes (on the coast, in the mountains, by a lake, in the desert ...)
where Michael was driving on the road at leisure before or after a mission
was assigned.

Here are two filming locations along the Pacific Coast Highway:

Season 4, Disc 2
Episode: Out of the woods

Scene: ... where Michael was driving (wearing a white cowboy hat)
in convertible mode after talking to Devon ... Part of the
coastal scene was used in the opening credit in Season 4.
(see the last photo of this post)

Great stuff, one_man! Here's a new location that I discovered tonight...it's the town used for "Fleur du Lac, Louisiana" in "Ring of Fire". In reality, it's Kenneth Street in Glendale, CA:

Numbers 1 and 5 can be seen below:

# 3 are the two buildings behind Michael:

# 4 is the rooftop where Cray shoots the Minister: Next map, which is the opposite side of the street:

# 2 is this building that KITT drives by:

I believe # 6 is the wall Michael hides behind when getting shot at by Cray, and I believe # 7 is the police station where Cray steals the police cruiser. Not 100% sure on those two:

Wonderful finding, Joe! What are the cues leading to this location?

Here are some 'now and then' photos from my last trip,
Season 3, Episode: KITT vs KARR
Location: Seal Beach

A. the parking lot where Mandy was kidnapped by KARR
(near the pier of Seal Beach)

B. John Stanton with KARR in front of the store 'Endless Summer'

C. Following the trace of KARR, Michael and KITT turned into the Main St. of Seal Beach.


Here is a location I'd like to find out. Anyone knows where this tunnel is?
It's a scene right after KARR was discovered, and Michael was honking in the tunnel

I believe that is the Tunnel on Malibu Canyon road. It's not very far from where KARR was dug up.
Looks like I'll have to go back to the beach, darn.


Can someone put up a screen grab for me of the restaurant or location at the start of Good Knights Work. I've lost that one DVD.

sorry Sue but I don't know if you're looking for that building becuse I didn't see some that looks like a restaurant... I hope will be usefull. If you need another picture, you can ask me!.
Have a nice day

:Hi everyone!!!... I don't know if you had already found this location but for any doubt, I posted anyway.
This place is the "U.S. Government Data Center" in the episode of "THE SCENT OF ROSES" and is located in Encino, CA, that's just in front of the Woodley Ave. Park (AKA "TANEKA'S COMPLEX" in "KNIGHT OF THE RISING SUN" that Joe (Huth) give us the favor to posted in the forum months ago).
Exactly, I don't know what kind of building is that, but I think it looks like a Water treatment plant or something that has to be with water affairs.
Anyway, I send you this information, I hope you enjoy!...
Saludos from Mexico!!!.