I was just think about this.

You know in Team Knight Rider there was a Character named Jenny and she drived Domino (the red mustang) she could be releated to Michael Knight Sr. since you know in one of the episode she tries to access Michael Knight Sr. records, so I was think she be Mike Tracer (Knight) sister.

You know in Team Knight Rider there was a Character named Jenny and she drived Domino (the red mustang) Mike Tracer mom could of worked for flag for a little bit after Michael Knight Sr. left, or why would she try and access Michael Knight Sr. records you know in the KR 2008 back door piolt Mike Tracer mom name was Jenny, so that is why I'm think that mike tracers mom used to work for flag of MK sr. left

If you take a look at Jenny in TKR and Jenny in KR 2008 they look like the same person.

Well they were actually played by different people, but I guess there is a similarity to them. 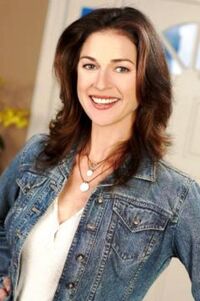 What would MacGyver do? - Find out here.
http://www.macgyveronline.com
Top

I though it was said in TKR that she (Jenny) though that Michael Knight was her father.
The Kenner Knight 2000 Voice Car. One toy can make a difference.........
Top

Seems like a possibility to me,but TKR KR2010 and KR2000 aren't in the storyline anymore.
Congratulations!By reading this signature,KITT's AWESOMENESS has increased by ONE POINT!
So far KITT's power level is OVER 9,000!!!!
Petition #9
Top

I wasn't being cute with the "ewwwww". TKR was pretty clear that if Jenny had a relationship with Michael Knight, that was a father/daughter one. If TKR and the new Knight Rider's Jennies were one and the same person, then we're talking about one screwed-up family. And Mike about to die. He and all of his 13 toes.
Top

If I recall right, the writer of KR08 pilot said in some interview (here on KRO) that he was adviced by his friend not to watch TKR at all and thus he ignored TKR completely when writing the script. I don't have the link for quotes, but I think it was here on KRO somewhere.
TAGAP: The Apocalyptic Game About Penguins - Join the penguin apocalypse!
Top

NeoRanger wrote:TKR was pretty clear that if Jenny had a relationship with Michael Knight, that was a father/daughter one.

That's like having Sarah and KI3T having a relationship!

Congratulations!By reading this signature,KITT's AWESOMENESS has increased by ONE POINT!
So far KITT's power level is OVER 9,000!!!!
Petition #9
Top

i think i only saw one episode of TKR and was not impressed in the slightest.
Lady: "I bet you're tall, dark, and handsome."
KITT: "I'm definitely dark and handsome, I'm only tall when I'm climbing a steep incline."
http://www.dhasselhoff.net
Top

Dr. Graiman wrote:Somehow I would like to see anything about the Knight Reformulation One (K.R.O.). At least they should mention KRO and Martin Jentzen to replace the original Michael Knight and KITT. And what about James Marland? He was hand picked to replace Devon Miles, revamp the Foundation, and invent new car technologies. Although it is quite difficult to think about Team Knight Rider as canon alongside the new KR, the downfall of the Foundation, Devon, Michael and KITT as shown in the Team Knight Rider episode 'K.R.O' is feasible. TKR finished off Foundations downfall so Charles Graiman had to reactivate the Foundation. Even TKR was quite anserine they should not ignore it. It was a FORD show... There a some similarities between the new KR and TKR: the plane, bigger worldshaking missions, a big team behind the car, the KITTcave...a MUSTANG. So to continue the legacy of KR and TKR would make sense. Additionally bringing back someone of TKR's cast wouldn't be as much expensive as the HOFF. I would give Duane Davis as Duke Depalma the preference to make a cameo.

Team Knight Rider does fit into this series ...seems to be suitable for fanfic
Top

ok, heres what i got. Mike traceur was born 6-10-1983. Looking at the gestational calendar, he had to been concived some time around 9-17-1982. the first season pilot aired sep, 24, 1982. Michael long was assumed dead august 8, 1982. so it has to be some time between then and the first maybe 3 episodes. i dont thnk we were suppost to be this smart to link this. the only jenny (jennifer) i have found was jennifer andrews of TKR, and Jennifer Knight ( daughter of wilton knight ) who appeared sept 20, 1982 season 4, episode 1.

when the 2008 pilot aired Mike traceur was 24 years old. (character, not actor) this was aired in febuary 2008. Michael knight ( hoff ) also mentions at the end to mike that it was 25 years ago that Wilton said, "One man can make a difference" no dates really add up.