The Hoff Sent Off???

The Hoff Sent Off???

David's been making a few headlines in the UK lately - not necessarily for all the right reasons though...

No comment about that; I think the tabloid media has a field day with him any way that they can, I guess.
Top

The All England Club has denied press reports that a "drunken" David Hasselhoff had to be removed from the Wimbledon tennis championships.
Security guards "knew nothing" of the claims, said a spokeswoman, adding the former Baywatch star "wasn't ejected".

He tried to enter the press centre while searching for Court 13 but was not correctly accredited, she added.

The actor, who is filming an advert in the UK, was treated for cuts last week after an accident with a chandelier.

As you can see, according to the latest news, the original report of David's drinking binge and ejection from The All England Club were completely false.

I'm glad that's a false story, and I'm not sure why people believe such crap like that about DH anyway.
Top

Lyn wrote:I'm glad that's a false story, and I'm not sure why people believe such crap like that about DH anyway.

I'm glad that the report is false as well, not that I honestly ever believed that it had very much chance of being true, since an occurrence such as that would have been all over the primetime news shows here in the UK, detracting from the Tennis tournament itself.

From what I can gather, the report originated from a newspaper called The Mirror, one of the UK's notorious red-top tabloid newspapers, and the article then made it onto The Mirror's website, taking on a life of its own. It actually reminds me of the time when my own local newspaper, the Scunthorpe Evening Telegraph, reported that Dan Paris, a guy who once starred in an Australian show called Neighbours, was the front runner to play the man behind Kitt's wheel when talk of a movie first began to get serious. Before I knew it, that story was all over the internet taking on a life of its own as well.

The tabloid press over here are truly awful. They are like vultures circling above tidbits of info and when they swoop to grab it, they embellish it with ever grain of cr*p that thay can. The Sun, The Mirror and The Star are the "red top rags" that are by far the worst offenders.

It's unusual that a story like that would make it into the BBC's news site. It does show that all the news agencies borrow and adapt from each other without checking the validity of the source.

And, to think...I just heard about this "truth" on today's radio. This could be very bad, indeed. 91x in San Diego has a couple DJ's who just introduced a brand new segment....all news fit to report on David Hasselhoff.

And, you better believe that, right along with three or four other Hoff stories, this falsity was included.

I was gonna check to see if a) they had a web site and b) listed this "new segment". 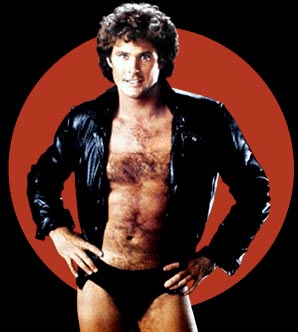 (I would shrink the photo they used. But, there seems to be no image size control tags in this board software.)

Oh my Lord, could David Hasselhoff get any more press? In my first ever "What's Hoff-nin'?" Hoff Report, we found out about the Hoff's *1* freak shaving accident, *2* spousal abuse allegations, *3* drunken Wimbledon antics, and *4* Ice-T collaboration. *5* Jump in My Car, indeed.

{Quoted, in case it disappears very quickly...which, I suspect it will.}

So...they, too, are just news hopping the net for stories...without verification. Sad.
Top

Matthew wrote:the Scunthorpe Evening Telegraph, reported that Dan Paris, a guy who once starred in an Australian show called Neighbours, was the front runner to play the man behind Kitt's wheel

I fell a bit for that one myself, but we uncovered the source of that rumor. Dan Paris' agent confirmed for us that they had in fact been in contact with Revolution Studios (the studio behind the film at the time), but apparently it was for another project. It was definitely a case of poor reporting and jumping to conclusions.
Top

Guys I don't know how false this is because I read this article in the new york post:

Hey,
this is the official statement from the management:

David Hasselhoff's publicist Judy Katz stated "David Hasselhoff enjoyed a
day's tennis with friends at Wimbledon yesterday. During the afternoon there was some confusion over accreditation as his party attempted to reach court 13. The situation was quickly resolved with the help of stewards. Reports that claim they were ejected were incorrect.
David has returned to the US today but will be back in the UK later this month.
Top
Locked
12 posts • Page 1 of 1