Re: Any good ideas for a crossover?

KITT mysteriously ends up in Apocalyptic Australia and is secretly combined, With the last V8 interceptor, In order to chase down an outlaw gang.

Re: What features should KITT have in the movie?

*Puts on his Donald Trump Wig* You're Fired! Not sure if this really a good idea? (Considering the feelings of some folks towards SPM!), But I've always had a feeling that KITT would be intersting with Hydraulic suspension?...Not so he could hang with Low Riders or act like Herbie! , But just to giv...

It certainly was a shock, That they're are using a Ford!, I was actually expecting a Japanese manufacturer? (Mainly due to the popularity of "Street/Drift Racing", Along with the fact, That most racers drive Japanese Imports), However, I still quite like the direction they're heading in fo...

Gasoline?.........So does that mean, The Turbojet and the Fuel Processor stays, Or will the car just be a High-Tech Hybrid? (As suggested)

He did do convertible mode too, Otherwise he had very little to do with the series.

Re: Peter Cullen interview about Optimus

Peter Cullen (voice of KARR in Trust Doesn't Rust, of course), is reprising his role as Optimus Prime in the video game based on the upcomign Transformers movie. (Not sure if he's playing him in the movie too, but I would imagine so.) yes couldkitt, Peter is playing 'ol Prime in the movie as well. ...

This is sad, But really isn't that big of a deal, Many recovering alcoholics, Suffer relapse.....More often that not, Just when they think they've got it licked. I Just pity the person, Who felt they had to publicly air the tape, Why people feel compelled to do this type of thing always amazes me? I...

It's part of a promotional giveaway where someone can win a right-hand drive 1984 Trans Am: m And here's the entry form: m And a pic of the car you can see on the entry form page by clicking on the "click here". Pretty funny stuff! AND pretty cool!! Too bad I'm in the USA and it's a RH dr...

Other than, It appears to belong to a Tyco slot car set.....Nothing?

FuzzieDice wrote:So true! Since many of us are into hi-tech stuff due to KITT being such a high-tech car and all that. Knerds I'd go with. Knighties? Forget it. Too feminine.

But what about the Frills and Spills of being a Knightie? Ha

The season 3 episode "Knight and Knerd".

It's just a fan joke, On the title of the episode.

I'm certainly Hoping that car will Appear in Australia.....Maybe as a replacement, For the recently cancelled CV8 Monaro?

Though that article still seems to be, Up in the air, As to what the GTO may eventually end up like?

This will beat the helicopter!

I think the new camaro would look the right sort of thing for kitt, that air cowl at the front is begging for a scanner hehe http://img.photobucket.com/albums/v324/moggy2004/newkitt.jpg I suggested lights on another thread, But seeing that, I think KITT would look better without them.

This could be a good sign, That he will, Or has signed on for the movie?

This is hard, Though I have to go for the 1st/2nd dash.

Speaking about forgotten 80's shows........What about "The Higwayman", Which was also created by Glen Larson? http://www.scifi2k.com/highwayman/highwayman12.jpg The show comprised of a feature length movie (1987) and a single season(1988) and the basis, Was about A group of futuristc US Ma...

He was in a tribute to The Avengers last year in the UK and didn't look very well at all, sadly.

I think he'd be too old as Devon anyway.

here's a name for the role of Devon Miles Patrick McNee- ( he'd be a good fit & he is Brit. ) of the Avengers & 1 or 2 Bond Movies & Battlestar Galactica "Mrs Peel, We're Needed!" I can completely see this, It's quite fitting too and as you've mentioned, Macnee has worked with...

It Could be KARR, But could just as easily be just a pile of boxes, With something shiny covering them....It's too hard to make out?

Yeah, It was a terrible thing that happened to Christopher Reeve, But he still fought it as much as possible.

I get what you mean, But I don't think that fitting KITT with gullwing doors...To mimick the BTTF car, Would be a good idea? There is enough moving body panels in SPM now, Without having the doors open aswell and the PRS, Would be the only thing holding Micheal in the seat. Though putting KITT's CPU...

First I gotta give credit to the originator of this work. His name is Matt. The only thing that I added was "pop up" headlight lines. http://www.mdknightrider.com/08KITTnew.gif If you look real close Matt even put in retro PMD seats! Enjoy! What about a couple of driving lights, Down in t...

Superman will stop that torpedo! 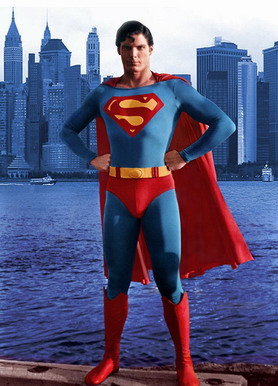