how about this one?

it's a photoshop someone made of my '00 firebird...

yeah.. that's where i got the calling sound from

couldn't find it anywhere else :/

hi! I was also looking for KR sounds for my cellphone and found this thread! I got the RAZR cellphone that can play mp3s as ringtones... and I thought it'd be cool to have the little sound that KITT made when Devon called Michael. So I searched on the web and found a wave file so I just extracted th...

Hasselhoff at the Mavericks game..

David is here in town and he attended the Mavericks vs. Suns game.. they showed him a couple times.

I'm glad that my pics helped

The model is looking AWESOME!!

If KITT existed and the whole Foundation was real, they would have to update the car every some years. The show is based on the early 80's. The last year for 3rd Gen Trans Ams was 1992; in 1993 they would have updated the car to a 4rd Gen, and used until it's last year, 2002. So if the whole show wa...

George.. great job on the 3D KITT!! It's looking better all everytime!

Can't help it, but I have an '88 Firebird with the same color you are working on

A 2002 Pontiac Trans Am would be the best choice; after that, the Z06 Corvette (since both are part of the GM family). Here's how KITT would look with a 2000 Pontiac Firebird (that's my Firebird photoshoped by someone in this forum ) http://img.photobucket.com/albums/v130/backwardstraveller/Firebird...

I just ordered mine from Amazon for $34.99; no TAX and free shipping

I should get it in a few more days...

Knight Rider on the iPod!!

Hi all!! I got an iPod video last december, and I just thought about having a few episodes on it. I have Seasons 1 and 2 and planning to get Season 3 tomorrow. I don't want to have all the episodes, but I was wondering what episodes are a MUST HAVE. So far I've thought about these: 1. The Pilot 2. T...

The GTO Concept would make a nice KITT! 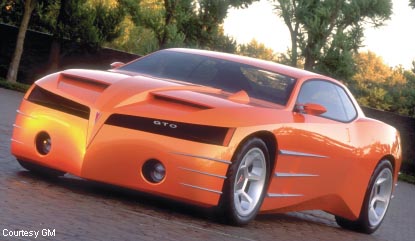 you got me thinking and I did a research. Looks like only 2 members from U2 did the first one; limp bizkit the 2nd one... m This is a reworked version of the Mission: Impossible television theme song, which was originally composed by Lalo Schrifin. It was recorded for the 1996 movie staring Tom Crui...

Are you referring to actually, U2's cover of Mission: Impossible? I didn't know Blink 182 did it too

Thanks... I sent my friend the link to this thread; I'm sure he's reading all the good comments

bzavala - BEAUTIFUL images! Those look so good they should use those to promote firebirds. I mean, if the firebirds were still being made (which I know they aren't now). I love the reflections on the car in both pictures. Thanks FuzzieDice Yeah... it's shame they're not doing them anymore I wanted ...

Did you by chance take those pictures in the West End in Dallas TX ?

Yeah, kinda... they were actually taken from the roof of a garage in Downtown Dallas (a few blocks from the West End).

Glad to know there's another KR fan from Dallas here

I'm sure my friend's gonna love it

A friend of mine did this cover of the KR Theme a few days ago, and I think it's great. That guitar gives it a special touch

FuzzieDice: I was reading your other post, and remember I forgot to mention something about this car.... the previous owner installed one of those alarm systems that you can start the car from the remote! It's cool; on saturday I tried it for the first time. A guy was walking behind the car when I s...

** UPDATE ** Well, yesterday I went to pick up the car. So far so good! Today I spent about 3 hrs to wash it and clean it. I already put up a site on cardomain.com; here are a couple of pics. If you click on them it'll take to you more pics. [url=http://www.cardomain.com/memberpage/708479] http://im...

most likely over the weekend

Well, the conversion will not start anywhere soon

but there's no rush

I wonder why they wouldn't insure it... I called my agent today and quoted me additional $200 for every 6 months, but I'll probably shop around more to find a better price...