Finnish Knight Rider Season 1 box set "Ritari Ässä" should be in stores today November 24th, 2004. If I recall correctly this release date should be the same for the Scandinavian (Norway, Sweden, maybe more?) releases. Some talk (a news item) in http://www.dvdplaza.fi but apart from that no discussion about it anywhere. I guess I'll have my own party by myself

and ask you to join me virtually.

Because this board has also some Finnish fans around, I would be interested to hear where they have spotted the box.

Not available in these stores:

I'll take a lunch trip to couple of stores in an hour or so. Maybe I'll have something to report after that.
Last edited by Toni Nummela on Tue Nov 30, 2004 3:43 am, edited 4 times in total.
Top

Very cool, glad to hear that everyones getting their copy. Can you let us know, does it have proper original Finnish audio? I'm curious about that.
Top

TV-shows nor movies are not dubbed here in Finland. Instead they are subtitled. That's because something like 99% (or maybe more) of our population is literate - Finnish people can read that is.

They have tried dubbing some tv-series occasionally - like Bold and the Beautiful had a test period of one week with Finnish voices. It raised some discussion here in everyday life and was considered "sounding very silly and funny". That is the common opinion here: Dubbing is silly.

However children movies are nowadays dubbed in Finnish by "famous" Finnish actors and I have to say they have made rather good job sometimes (ToyStory 2 is almost funnier in Finnish IMHO) but that's mainly because children can't read so fast that they could understand the plot. There is usually the subtitled "original audio" version playing along with fewer screenings in movie theaters.

I personally like the original audio. I really want to know how David Hasselhoff really sounds like (or did sound like in the 80s) and I also like to hear different languages. When I was a kid (something around 7-10 years old) I used to watch foreign channels Transformers, M.A.S.K., Inspector Gadget, G.I.Joe and some others without any subtitles. They were so cool series and none of my friends knew them but only after a couple of years when they came to Finnish TV-channels. I guess my first English phrase was from Inspector Gadget: "Next time" or something

But back to the topic:

No luck on the near supermarkets. I'll guess I'll be doing some more hunting today.
Top

I've asked from local Anttila store about KR season1 dvd and they said it's not yet (24th-11) available in the shop but may be there on thursday(25th) or friday(26th) and the price is 69,95euro. Gotta go tomorrow to check if it's finally there so I could buy it

I'm really glad that there is KR dvd scandinavian version with finnish subtitles, thank you Universal!

Glad to know that! Lucky guys!

Unfortunately, Knight Rider DVD isn't and won't be (I think) available in Portugal...

Do you know if there are any releases scheduled for Portugal?

OK. I'm having my party NOW!

Here it is and my god it's beautiful after I took an ugly sticker off the cover. It looks like the outside box is only localized. Inside sets seem same as in UK-version writings all in English. I don't mind about that. 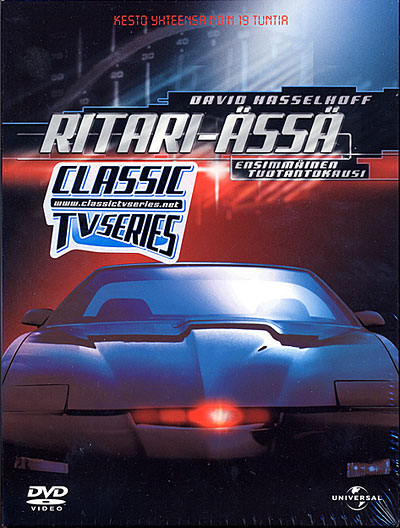 According to episode listings in the cover, the content seems to be untouched with Pilot Episode Knight of the Phoenix being on the seventh disc.

I'll edit the price info I got today to my first post in this thread.

[UPDATE]: Actually I have now Disc 1 (printed label) in my player and the content is actually Disc 7 (KOTP and Noboy does it better). Subtitles seem to be OK.

Knightuser: I unfortunately have no idea whatsoever about release plans in Portugal. Sorry.
Top

KITTfan: Could you please tell me in which city's Anttila you got that price from?
Top

Same disc twice in the set!

There are two discs with same content in my box set. Disc 1 and disc 7 both have "Nobody does it better" and "Knight of the Phoenix" and bonus commentary. The label however says disc 1 and the other disc 7. It seems like somebody mixed up digits "one" and "seven" when this thing went gold

I checked all other discs and there were no mixups there. I guess I'll have to bother Universal Pictures Finland about that missing disc 1.

Anyone else having the same problem?
Top

Gotta search it next time when I'm near DVD's.

KITTfan wrote:I've asked from local Anttila store about KR season1 dvd and they said it's not yet (24th-11) available in the shop but may be there on thursday(25th) or friday(26th) and the price is 69,95euro.
-KITTfan-

Ok, I bought it today from Anttila (Kuopio) and the price was 70,95 euro so I was misinformed when I asked the price before.

Same disc twice in the set!

My discs are ok so you just need to go to the shop where you purchased it and ask them to replace it.
The pilot is in disc 7 and disc 1 has the Deadly Maneuvers, Good Day at -White Rock and Slammin Sammy's... episodes + Knight Rider under the hood bonus feature.

Wow, this dvd set is really cool, packaging, extras and the quality of the episodes is excellent! Can't wait the season2 DVD:s