Yet another product of the Japanese and international NBCU licensing market *sigh* for a minute I thought there was hope for classic Knight Rider making a return here in America. Looks interesting. Always suspicious when you find a video game "officially released" with typos in it and inaccurate show logos.

I noticed it also has Goliath and K.A.R.R. featured in it which is always cool and Goliath looks like he should too. Download their quicktime video sample and scrub through it and you'll see what I mean.

K.A.R.R.: Catch me in 3 minutes or these clowns will suffocate to death.

Garth: Comrades, the time has come for us to destroy the Foundation! (note they didn't put the "e" in Garthe)

Anyone downloaded it? It's only 2.99 so I thought I would give it a shot. It's not a bad game but the controls are a little frustrating and there are some mistakes with some sound FX (wrong sound FX for certain features of KITT) but it kept me busy for about a half hour.

For those of you that own an iPhone or an iPod Touch there's a new Knight Rider game available for download at only $4.95 (or maybe $6.95, can't remember which). Just enter iTunes or the App store and search for 'Knight Rider' and download the game!

Speaking of iPhone and iPod Touch, the new iOS 4 is now ready for download.

Enjoy!
Michael: Kitt what matters to me is who you are not what you look like. Sure we don't have the car so we can't turbo boost so we can't go over 200 miles an hour but it was all icing on the cake anyway
Top

I've been playing this for a few days now and the game is quite bad.
Love boxing? http://www.ringnews24.com
Top

Skav wrote:I've been playing this for a few days now and the game is quite bad.

What is bad about it exactly? How is the soundtrack? Is it original? I don't have an iphone so I can't test the game out myself, all I can do is look at their preview clip on their website.

.....doesn't inspire me with a lot of confidence to be honest. Not that cheap for an iPhone game either.
"I would not sell yourself short Michael, you are much more than a horse"
Top

.....doesn't inspire me with a lot of confidence to be honest. Not that cheap for an iPhone game either.

Thanks for sharing. Looks like it could have been a lot of fun if the controls were better. I think the graphics look great actually but that's me. I like how they paid attention to the design of the original series and incorporate it into the game unlike any other out there. A shame the controls ruin the fun and that its only on cellphones.

Skav wrote:I've been playing this for a few days now and the game is quite bad.

What is bad about it exactly? How is the soundtrack? Is it original? I don't have an iphone so I can't test the game out myself, all I can do is look at their preview clip on their website.

The game starts off with an FMV video of the KR intro from a particular episode, I think it's a season 1 ep but not sure.

The graphics are pretty good and I won't go into that because the youtube videos have already shown you them.

Soundtrack during gameplay is decent but nothing memorable, in fact, it's rather generic. It reminds me of the type of music they used to put in during the gameplay of C64 games back in the day.

Controls are awkward, KITT's steering wheel is in the bottom left corner and you tap either side of the wheel to turn KITT.

The birds eye view wasn't the best view to choose for the game as I find myself easily bumping into oncoming cars and this ends up being frustrating when you have missions based on time limits and having to chase other cars.

The game has KITT features such as Oil Slick, Turbo Boost and Pursuit Mode for extra speed. When pressing the Oil Slick, the game switches to a quick shot of an FMV sequence showing oil "shooting" out of Kitt's behind from the racing scene during the Pilot episode and then it switches back to gameplay.

Depending on one's view on this, I thought it was a cheap way of trying to make things authentic but at least they never did FMV shots for the other features.

Missions themselves are quite small with nothing major to play, as I said, timed missions and chasing around objects.

At least that's what I have got so far but I haven't even bothered playing it for a couple of days.

For me, it has very little playability and addictiveness and the overall gaming experience feels very cheap!

In comparison with the A-team game based on the new film, players may have more fun playing that one as I did.

However, if you are a Knight Rider fan and own an Iphone, no doubt you will buy the game anyway.

- Knight Rider on NES is hands down for me the worst and most frustrating game for KR ever made. I beat that game once and it took me about a month to do it (because I wouldn't let "it" beat me) and after several thrown controls later, swore never to touch it again. EVERYTHING kills you in that game! Getting hit, running out of gas, running out of time. Horrible! 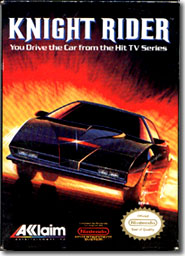