The success of Knight Rider Festival 2

The success of Knight Rider Festival 2

Knight Rider Festival 2 has come and gone and everyone is sharing stories about the great weekend. I certainly don’t speak for Paul Casey (the event coordinator), but I am confident that if you were to ask him “what made Knight Rider Festival 2 successful”, his first response would be “the fans”. And in many ways he’d be right. All of the energy of the weekend came from the fans swarming around the VIP guests, wearing their custom-made Knight Rider shirts, and of course sharing their fantastic replicas.

Think back to a year ago: The VIP guests were kind of taking a risk coming to the event. There’s a bit of traveling involved with getting to Vegas, and nobody was really sure what to expect. But they came. And a year later, they came back. I think that’s important. Glen Larson. Michael Scheffe. George Barris. They all recognized that Knight Rider Festival was a worthwhile event, and that’s why they returned.

But something else happened, something very special: the VIP guests started doing their own recruiting. Rebecca Holden couldn’t make it this year, but she told Ann Turkel that the festival was a great event; it was a pleasure having Ann there. The amazing Jack Gil told David Hasselhoff that he just HAD to come to the event. And don’t get me started on Catherine Hickland; over the past year, she has become one of the greatest ambassadors for Knight Rider that this fandom has ever seen.

I would like to add in my opinion the efforts of Steve Fawcett, Marina, myself, Tom Greene, the fans on KR forums, fans on facebook, and fans on twitter who consistantly championed the cause for people to support this festival deserve just as much credit for getting the celebrities themselves involved, including David Hasselhoff.

There were many milestones at this year's event due to our efforts.

We all banded together to believe in supporting a cause greater than ourselves and in that support and taking of risk both financially, physically, and emotionally - we all proved that collectively this fandom can achieve great things when we set aside our differences for a greater good.

While I believe Knight Rider Festival 1 was helpful in beginning what is turning out to become a trilogy of Knight Rider celebrations, it is minimal success if one did not learn from their past mistakes. This year we did it right and we did it big because we chose to put on the best damned show we could manage.

We looked at what was missing from the first festival and we made it bigger, better, stronger. We made a sequel worthy of the term. Knight Rider Festival II was a worthy successor to the original concept.

No heavy sponsorship, no television network financial support - just us fans throwing a celebration for what we enjoy most and all for a cause worthy of the belief and ideals of this show we call "Knight Rider". It gave me a great sense of achievement and humility to witness Paul Casey's endless love for his daughter which is truly inspirational and his main drive to make Knight Rider Festival possible, other than raising money for The Children's Miracle Network.

Thank you to everyone who sacraficed so much to make this show a stunning success! Thank you for bringing your cars, your smiles, and your patience. We set out to make dreams come true and I believe collectively we have accomplished our mission to help the innocent, the powerless, the helpless, and keep the spirit of Knight Rider burning bright for another decade to come.

Both Glen A. Larson and David Hasselhoff were blown away by the popularity of this event which exceeded their expectations. This is why they chose to futher involve themselves long past what they were expected to do. David and Glen signed cars, posed for pictures, and stuck around to take in the sheer volume of support that they had to experience first hand to really understand. To grasp why people still care to celebrate a 27 year old show.

We showed the two biggest names in Knight Rider that they make a difference today just as much as they did back then.

All of you who chose to support Knight Rider Festival II regardless of your position or status made THE difference in the success of this year's event! Knight Rider Online did a fantastic job of covering the scale of this event through their coverage of video and photographs, not to mention the contributions of other fans who have graciously provided their own photos and videos which combined allowed people who couldn't attend to experience the excitement of this fantastic celebration beneath the shimmering archway of the Fremont Street Experience.

History will remember you for what you accomplished there in every photo taken and every video recorded. You can proudly say as a Knight Rider fan, I was there. If you couldn't make it out to the show, you can now choose to say "I will be there" next year. 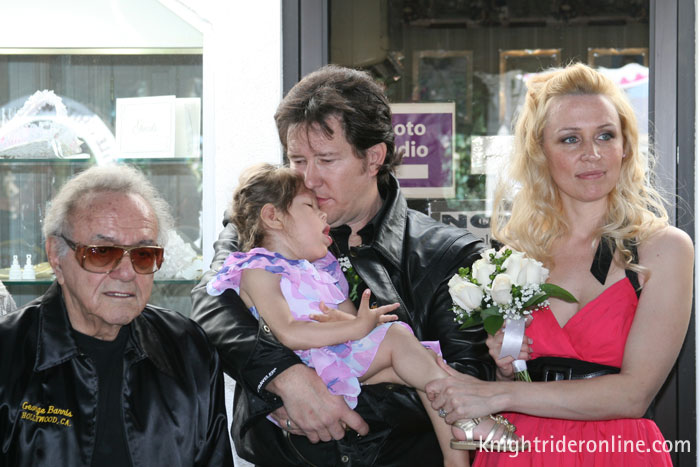 Thank you for choosing to make a difference.

Darn it, that's it....you guys need to FORCE me to go next year...I can't miss another one!

The show Knight Rider Festival I and II was a great success and also especially of children to help Children's Miracle Network and the stars David Hasselhoff, Catherine Hickland, Ann Turkel, Deanna Russo and creator Glen Larson and music Don Peake were fantastic in the series television Knight Rider.

But the most important is that stars William Daniels, David Hasselhoff, Peter Parros, Patricia McPherson, Rebecca Holden, Catherine Hickland, Pamela Susan Shoop should be together on the show Knight Rider Festival III, because I liked a lot and have my hope and my dream.

And the children and the fans of everything the World also has the hopes and the great dream! The actor John Schneider Children's Miracle Network also could participating in the show Knight Rider Festival III, it would be very fantastic!

Remember that the actor Richard Basehart (Wilton Knight) when he said: "One man can make a difference" and we continue to always support the series television Knight Rider.

Thank you all.
Sincerely,

It was nothing short of a blast. I almost didn't make it this year pending repairs to KITT, but I'm glad I was able to make the pilgrimage. All politics aside, we did indeed come together to make something out of an 80s TV show into a positive force for the children who will benefit from CMN's efforts (while having fun no less!). Essentially, we upheld the ideal of the show and made a true difference.

I wanna thank Neil, Sue, Sarah and Nick here for their efforts and coverage of the event (and for the laughs on Sat night), as well as others who made the show what it is. I want to thank Paul for his tireless efforts to putting this show together and for those who will benefit from it. I'm glad we all had enough faith and in each other and perseverance to work at making this show as successful as it was. Everyone had a role to play and the result was pretty awesome. I certainly wanna thank the cast members for returning to hang out with us (great as always) and the newcomers like Ann Turkel whom it was a delight to finally meet. I'm glad Will It Make It was able to come out again - their outfit was as classy as always and I hope they can work on getting Turbo Boost under the hood for next year.

I only hope this will broaden the horizons for KR and bring new members to the fandom (and maybe new replica owners?

). I'll send what few pictures I took as soon as I get a chance.
"I cut my finger. That's tragedy. A man walks into an open sewer and dies. That's comedy."
Top

This year was a smaller event but that didn't change the feel. The excitement was in the air all week leading up to it in here...and the moment you set foot on Fremont St expecting to see KITT didn't lower your excitement one iota.

This year had everything from David Hasselhoff to good friends in a parking garage taking pics of KITTwith a blonde bombshell model. BTW- That was great fun!

We helped make money for a wonderful cause too! Thank you!

I sooo can't wait to do it all again!

*dashes off to mark my calender for next year*
That is a computer not a sofa.......Knight of the Drones

Joe Huth wrote:Darn it, that's it....you guys need to FORCE me to go next year...I can't miss another one!

You SHOULD go! I feel like I asked the VIPs all the questions I can think of, I'd love to have you there to help come up with some really good ones.
Hello, I am Sue’s Hybrid Automated Droid One-thousand. But you may call me SHADO.
Top
Locked
8 posts • Page 1 of 1