I like that Cadillac CTS, it really could be new KITT. It looks so elegant.
Top

victor kros wrote:Well thanks to the both of you then, Hardkore and Lost Knight. I read so many forum posts these days, it's hard to keep track of who says what all the time when it's not something problematic.

It's one of those videos you really have to see to believe. Definetly for me has that "wow" factor.

Ditto for me though I can't help but think "what if you really need to get in and close the door fast?" Then there's the whole rain/snow issue.
The new and again improved evil's advertisement is currently too long and too badass to display here. But let's just say that with now 50% more evil, this **** is great!

Radicalas wrote:I like that Cadillac CTS, it really could be new KITT. It looks so elegant.

Wow I did't think anyone would mention that! I love the new CTS as well, besides my father is a Salesmanager for Cadillac. Anyway, Cadillac's have gone a great deal of improvement with their interiors and exteriors designs as well as their unique features (pop up nav, 40gig hard drive, light piping, etc.) Now if you think the CTS is a good idea, why not use their CTS Coupe Concept, it is 95% production output right now. Funny I was thinking about posting that too on the new coupe being KITT, enjoy the pics below!

Okay Toni your services are required. For this beauty.
Top

I just can't see the Cadillac CTS Concept working. The concept version really doesn't look all that much different from the actual version, in my opinion. The thing with most Cadillacs is that they all look too similar to one another with the exception of the Escalade and XLR. It's also one of the reasons I don't care for BMWs, because most of them look the same. And speaking of the XLR, that would be the only choice for me if Glen were to go with a Cadillac. It has a standard hardtop convertible and can switch back and forth from manual to automatic gear shifting. Here's some shots:

And just for fun, here's a shot of the Cadillac Cien Concept:

“Gimme maximum turbo thrust and blast me outta here, will ya!?”

No love for the Nissan GTR?


Here are my reasons why I'd pick that car.

I want to have a post on what cars I would choose and why with some pictures and such. I just haven't had the time.


For some of you that may have not considered a Japanese car and are more with the mind frame that KITT must be American muscle, hear me out and keep an open mind. This has so much more in common with what a Firebird was in 1982 than you might think =)

Here are my reasons:

[li]In 1982 Glen Larson had originally contemplated KITT being a Nissan before deciding on the Firebird[/li]
[li]It's a two door 2+2 sports car just like a Firebird and just like a Firebird only little people and children can fit in the back, but that solves the whole 2 seater argument[/li]
[li]The Skyline brand (in this case Nissan has dropped the Skyline name since there is a Skyline over there, here we know it as the Infiniti G37, but the GT-R is in essence heir to the Skyline GT-R R-34) has a rich automotive history in Japan it goes back to 1957 and the Skyline GT-R sports car goes back to 1969[/li]
[li]The GT-R is really a modern technological wonder as far as cars out right now just like an 82 Firebird was in 82. Nothing like it has ever been imported here, it is unique new and fresh.[/li]
[li]It's a new design not a 4 year old retro car, it doesn't look like anything else out right now. It has some styling cues that let you know it's from the Nissan Skyline bloodline, but it's its own animal. Much like the 82 Firebird was a significant change from its 1981 predecessor[/li]
[li]It's a tangible car, it's not some concept, it will be sold here and will be able to own one[/li]
[li]The front end is just dying to be slightly modified and have a scanner slapped in it[/li]

I think it just seems to "fit" more with the essence of KITT. Those are just some of the reasons. I have my cons, like it doesn't have pop up headlights or t-tops and yes it's not a Pontiac, but for me the pros heavily outweigh the cons. It doesn't come to the states until the summer of 2008 and I think that will still be fresh and new for when the movie comes out.and for those that have no clue what it looks like here are some pics:

That new Caddy is pretty slick, but I don't think it's sleek enough.

By the way I believe those new "2011" renderings were based off of the Acura concept car.

Now if we were going to go concept car, forget the Acura. I'd say Saab Aero X, I've seen that thing in person and it's incredible.....it's also technically a GM =)

Some more info and pics

Anyone? Feedback thoughts? No?
Top

Vampire I think the reason you are not getting any feedback. Is because there have been so many cars that have been tossed around for the new kitt. I think everybody is burned out on the subject. I know that I am. Until Glen's movie really starts to do somthing I'am not going to get too excited about it.
Top 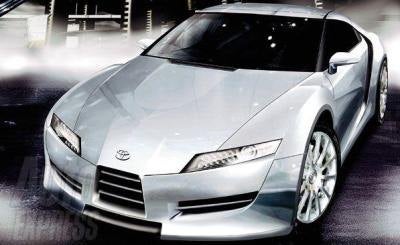 That one is cool, nissan makes some cars in the USA, is that one of them? If so I'd be down for it.

IF You're BOND....JAMES Bond.....either car might appeal to ya But only after Q-branch got done with it!

That one is cool, nissan makes some cars in the USA, is that one of them? If so I'd be down for it.

Well since it's RHD, I don't think it's made in the USA.
KNIGHT RIDER RELOADED is a series of movies on Youtube to represent a different creative avenue to the Knight Rider we knew in 2008-09.
http://www.youtube.com/user/tamatt27
Top

I found some pics of the new Chevy Camaro SS. This looks better than the regular Camaro.